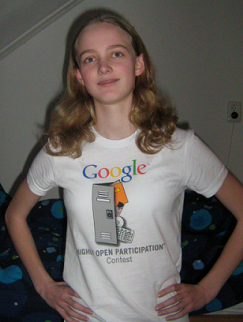 My hobbies are playing the piano, swimming, folk dancing and of course: my computer! Don't like those computer games at all. I like to read and post on forums and to do something with building websites.

I met Marijke (MarijkeS) at a forum of Windows Live Spaces, 1.5 years ago. With 4 others we set up a team making gadgets for Spaces. We completed 7 of them. A new site for the forum was needed, and also space for other applications and information. Marijke already knew something about Joomla!, so it was a easy choice. That's the first time I came in contact with Joomla!. Soon I tried to set up my first Joomla! site, and registered on DutchJoomla.org, the Dutch Joomla! community.

At first I read a lot of post (yeah.. I still do), and then started posting myself and tried to help others. Marijke asked me for translating the 1.5 Help files together with another student. Because they weren't completed at all at that time, the work wasn't completed.

But I was a member of the translation team now, and started translating a few components. I translated JamBook, Phoca Guestbook and after that sh404SEF, of whom I'm a translation partner now. I'm also testing the translations of dutchjoomla for the 1.5 releases and some nightly builds.

The 'newsreporter' of DutchJoomla posted an article about the GHOP project. I was interested, but first thought it was only about the coding. When I looked closely at it, I saw there also were a few translation tasks! I claimed the translation of the Installation Manual and started to work on it. I enjoyed it a lot! After that I claimed another translation task, translating a team blog. Although there were no translation tasks left, I didn't stopped with the work for GHOP, because I liked it! First looked to documentation tasks, but there weren't any left which seems fun to me. Then I saw the unit test plans, and looked to them. I liked it, and so claimed one. And a second one after that. I decided to do some coding work for the next task, but there wasn't any open code task. Then tasks were added about testing unit test plans. Completed one of them and busy with the next one! I'd like it that my work is useful to the official Joomla! 1.5 stable release. And after this?.. Don't know at all! I really like the project, especially all those positive reactions on my work! If there is any task which I would be capable to do, I'll definitely claim it!

How could you make it better in future? Don't know! It's really perfect like this!!! I love it!

Uhm.. only one thing perhaps: include the links to several websites within the task description. I couldn't find the document in the Wiki in the beginning (and actually; didn't look for it as well).