This page is a translated version of the page Model-View-Controller and the translation is 5% complete.
Other languages:
Bahasa Indonesia • ‎English • ‎Kiswahili • ‎Nederlands • ‎català • ‎español • ‎français • ‎italiano • ‎日本語

When Joomla is started to process a request from a user, such as a GET for a particular page, or a POST containing form data, one of the first things that Joomla does is to analyse the URL to determine which component will be responsible for processing the request, and hand control over to that component.

It will do this by running the entry point component PHP file for that component. So if the component is called com_example, then Joomla will run:

If you are developing a component then you could actually put all of your component code into those 2 example.php files. However, an advantage of following the Joomla MVC pattern is that you can make full use the Joomla library MVC classes, which greatly reduces the amount of code you need to write. 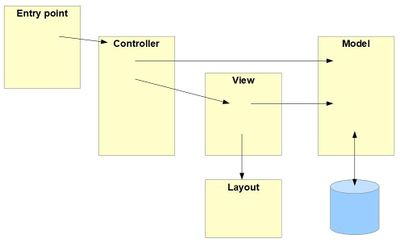 If the component is displaying a form which is defined in XML using the Joomla Form approach, then the model handles the setting-up and configuration of the Form instance, ready for the layout to output fields using $form->renderField() etc.

The getInstance() method of JControllerLegacy (or BaseController, as it is now known after Joomla 3.8) is where all the magic happens. It 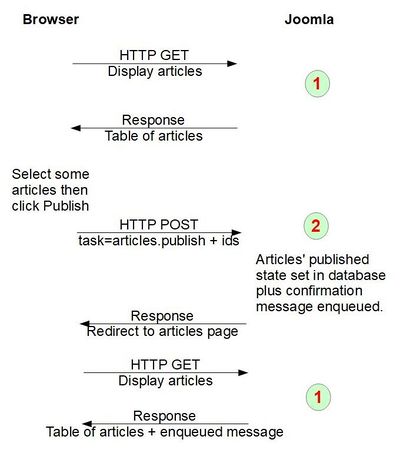 Joomla follows the Post/Redirect/Get pattern, which means that when a user submits a form in an HTTP POST, then rather than Joomla responding to the POST with an HTML page it redirects to another page which the browser will access with an HTTP GET.

This is typified when the administrator displays the Content / Articles page, as shown in the first diagram. The action to be performed is indicated by the task parameter, and both it and related data are sent in the POST request. Once the action is performed the next web page to be displayed is defined in the HTTP Redirect. 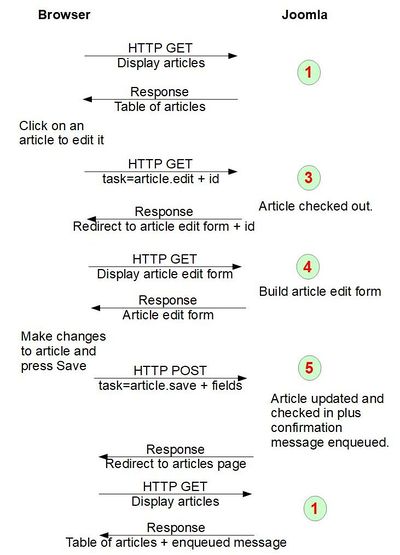 The second diagram depicts the pattern when an administrator edits an article. In this case there is the additional step of displaying the edit form, which again Joomla handles by sending an HTTP Redirect in response to the original request to edit an article. (At point 3 Joomla (in the BaseDatabaseModel) stores an "edit id" in the session and component controllers check this id at point 4, to ensure that user's can't just specify the URL of the form directly, without going through point 3).

The red numbers in green circles in the diagram refer to the different types of HTTP request which Joomla is handling, and we'll see in the next section that different Joomla MVC classes have been defined to cater for these 5 cases.

In general, using the base classes is a good option if your component is displaying a single item on a site page.

However, note that it doesn't support the operations enabled by the Batch button on eg the Content / Articles page. The code generally calls the related model method to effect the operation, sets up the message based on the success of the model operation, and sets up the redirect back to the same page. For this reason it's very useful in case 2 shown in the diagrams above in Post/Request/Get pattern.

The name AdminController suggests that this controller is to be used only on the back-end administrator functionality, however, this is not the case. It's appropriate to use it on the site front-end as well. 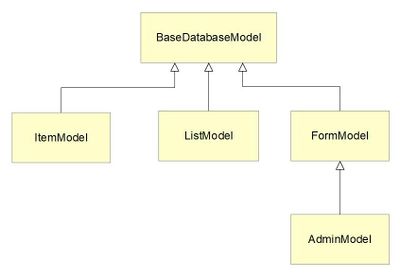 ItemModel is almost the same as BaseDatabaseModel; it just has an extra getStoreId() method which is relevant when you have a component and/or several modules sharing the same model and you want to distinguish between data sets relevant to each.

In addition to getStoreId(), ListModel has capability relating to obtaining a set of records for display on a web page, including support for pagination. Note that the pagination capability may still be slightly different between the front and back ends – see this issue. The ListModel is useful for supporting case 1 in the above diagrams.

AdminModel extends FormModel, so it has all the capability for handling forms, but in addition has methods for handling database updates – including capability for adding, updating and deleting records – as well as support for handling operations in batch. So it's suitable for handling cases 2 and 5 in the diagrams above. As with the AdminController, this model is not just appropriate for the administrator functionality, but can be used on the front end as well.

When you're using the model because you're handling a POST (ie cases 3 and 5 in the diagram) then any effort expended in preparing the data for a web page is going to be wasted. (In fact, in the FormController getModel() method call, the parameter $config is set to array('ignore_request' => true) by default, which results in the model's populateState method not being run, perhaps to save this wasted effort).

The choice of which controller and model classes to extend is easier on the back end, because you just follow the pattern of the Joomla core components.

For the front end here's a rough guide: