VS Code - A Popular Free IDE[edit]

Visual Studio Code, also commonly referred to as VS Code, is a source-code editor made by Microsoft for Windows, Linux and macOS. Features include support for debugging, syntax highlighting, intelligent code completion, snippets, code refactoring, and embedded Git. Users can change the theme, keyboard shortcuts, preferences, and install extensions that add additional functionality.

The VS Code site default page has a drop-down list for each supported platform. The chances are that your platform is pre-selected. So download and install and you are ready to go.

The VS Code Get Started page has some Start items, a list of Recent items, and a short list of Walkthroughs. If you are completely new to VS Code these are recommended viewing. They only take a few minutes.

The VS Code Documentation is available from the Help / Documentation menu. The Introductory Videos are well worth viewing. Each takes 2 to 6 minutes and gives an excellent introduction to VS Code features

The official documentation is the place to go to if you want to look up specific information.

VS code can be used for any type of text, including a wide range of programming languages. It works with JavaScript without adding extensions. Other languages are detected by context so if you start creating and saving PHP code you are likely to be prompted to install a PHP Support pack.

Click on the Extensions icon in the left Activity Bar to see what you have installed and what is recommended. You will need the PHP Debug extension!

The VS Code Screen Layout[edit]

Select a layout icon at the top right to open or close any one of these items.

To create an extension your objective is to create a zip file that you can install in a working Joomla site. So you need a folder to contain your code. This should be within your personal file space on your laptop or desktop computer used for local development. It should not be in your website tree. For example you could use ~/jextensions to contain subfolders for different extensions. I use ~/git because it is short and easy to spell although potentially confusing because each subfolder uses a separate git repository.

If you would like some sample code to work on there is an extension available on GitHub named mod_debugme. As the name implies, it is a module with some bugs. In addition to the module code there is a build.xml file to illustrate one way to automate building for testing and creating a zip file.

The module is designed to show the next few (3 by default) events (birthdays) from a list stored in a database table. You might imagine this being used in an office or family site in the expectation of cake.

It may be best to get going by using git commands from the command line. First create a folder for your code and then clone the remote repository:

The response should take just a few seconds:

You should take a moment to look at the contents of the folder:

Compress the extension folder to create an installable zip file:

After installation, delete the zip file.

When you open a page containing the buggy module you will see a stack trace telling you where an error was triggered. 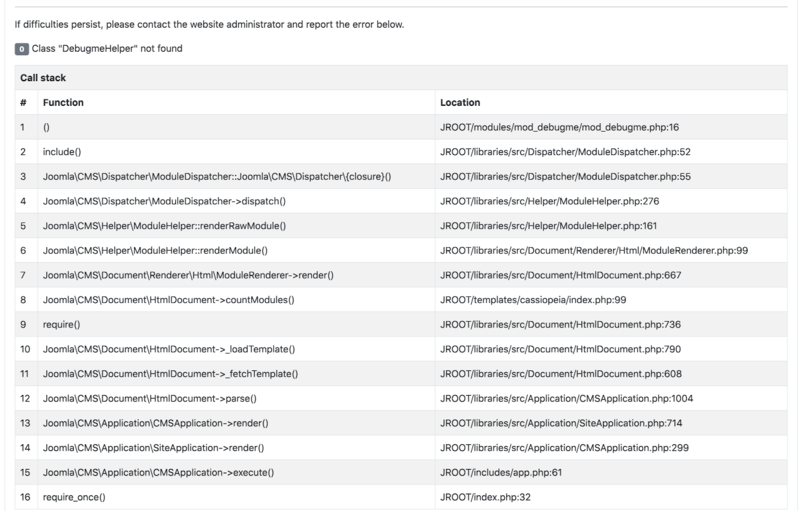 Sometimes the coding error is on the first line of the stack trace. Otherwise, if the error is triggered in library code, for example by passing invalid data to a database function, the coding error may be further down the list of function calls.

Open Extension Folder in VS Code[edit]

In VS Code, use the File / Open Folder menu item to locate and open the folder containing your local copy of the mod_debugme extension code. You should see something similar to the following: 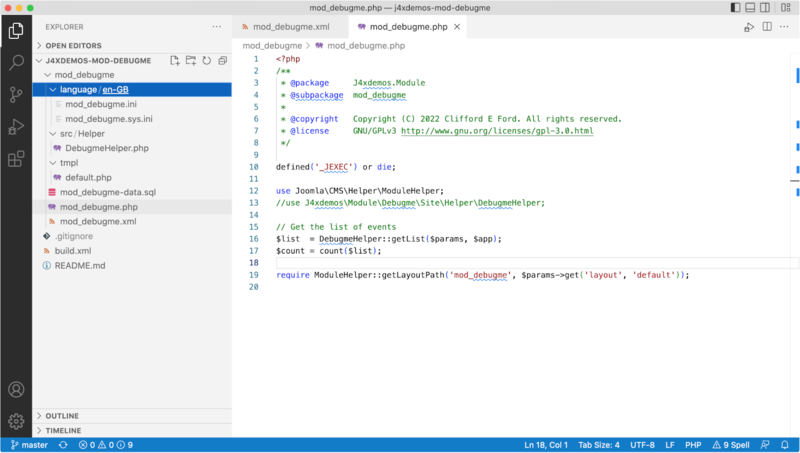 You may be able to diagnose the problem just by reading the code. In the case of the Class "DebugHelper" not found error you will see that a use statement has been commented out a few lines previously. Forgetting to insert a use statement is a common error during initial development!

Fix that problem and then compress and install the module again. That step gets a bit tedious when you have multiple problems. Which is where build tools come in useful.

Phing is a command line tool, available for all platforms, used to build software packages using instructions stored in an xml file, named build.xml by default. For working with extension code it can be used to do two things:

Download and install Phing. Other build tools are available! You could install Phing in your own bin folder or in a system bin folder. You need to note the path to your Phing code. In this example it is ~/bin/phing-latest.phar. You can try it out from the command line after changing into the folder containing your extension code:

To run Phing from within VS Code you need to create a tasks.json file in the .vscode folder in the root of the j4xdemos-mod-debugme folder. If the latter does not exist, first create it. Then create the tasks.json file and enter the following code:

Windows users need to fix the Windows-specific command. You can now build the extension using the menu Terminal / Run Build Task. The result of the command should appear in the Terminal Panel beneath the Edit area.

There may be incomprehensible error messages. The most likely cause is in having invalid paths to folders in the build.xml file or a folder has not been created. Just another sort of problem to debug!

You should be able to fix the first bug by code inspection. More complicated problems require stepping though the code with the debugger. That allows you to inspect variables to see if they contain values that you expect, for example when passing arguments to library functions.

To set up debugging with Xdebug you need to make some entries at the top of your php.ini file.

After saving any changes, restart your Apache server.

Your extension folder contains just a few files, the sources of the files installed in your website. Runtime debugging involves setting breakpoints in your site files so you need access to those files. You could use the File / Add Folder to Workspace... menu to add the site folder to your Workspace. However, there is a very good chance you will end up making changes to site files instead of source files. So it is probably best to open a separate VS Code window for debugging.

For debug to actually work in VS Code you need a launch configuration. In the root of your website create a folder named .vscode (note the leading stop) containing a file named launch.json with the following content:

Remember to replace the pathMappings item in this example with the actual pathMappings on your own site. The stopOnEntry item will pause execution on the very first line of PHP code executed.

Now you are ready to find and fix the bugs in the installed module.

Remember: Do not fix the bug in the website code! Fix it in the source code!

Fix the source code and then use Terminal / Run Build Task....

A few not so obvious problems:

When all is fixed this is what you might see: