Working with Git and Eclipse

There is an excellent tutorial on getting started with Eclipse and EGit at vogella.com/articles/EGit/article.html.

Installing Eclipse with PHP and Git[edit]

To Install Eclipse with PHP and Git, follow these steps (as of April 2014 Eclipse "Kepler" comes with Git already included):

At this point, you should have PHP and eGit installed with Eclipse. Confirm this by selecting Window→Open Perspective→Other and make sure that the PHP and Git Repositories perspectives show on the list.

Creating a Project from a Remote Repository[edit]

Normally the first task we need to do is to create an Eclipse project from a remote Git repository (usually on Github). The repository might be a fork we have created for our own use or it might be a Joomla project (CMS or Platform) or someone else's project. In any case, we follow the same three steps:

Note that there are different ways to accomplish this. Here are detailed instructions for one way to do this.

One easy to way to clone a remote repository is using the Git Repositories view in Eclipse. Here are the steps:

At this point, we have the local repository created. Now we want to create a PHP project in the same directory that we used for the repository. Here are the steps.

At this stage, we have our local project in Eclipse. However, it is not associated with the Git repository. To do that, we have to "share" the project. Here are the steps. 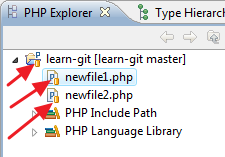