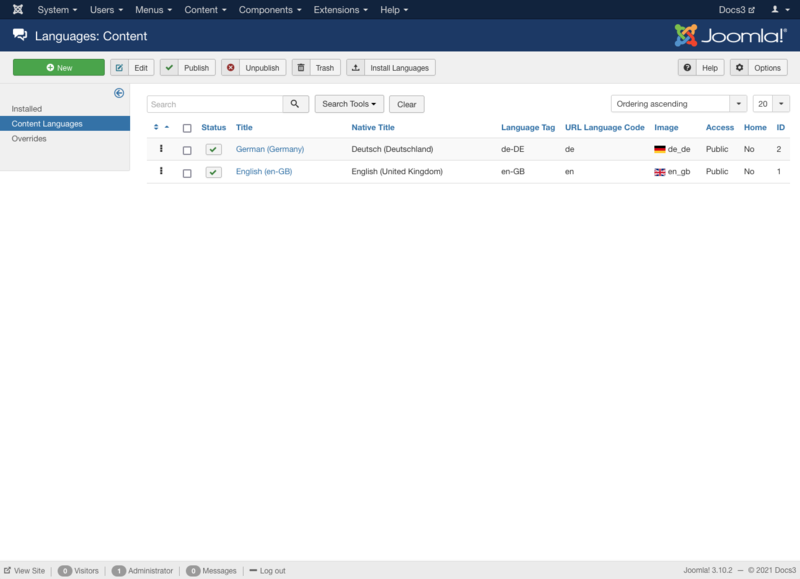 In the table containing languages these are the different columns as shown below. Click on the column heading to sort the list by that column's value.

Above the column headers on the right, there are 2 dropdown input fields, Sort Table By: (preset to 'Ordering ascending') and a number (preset to '20') to display. 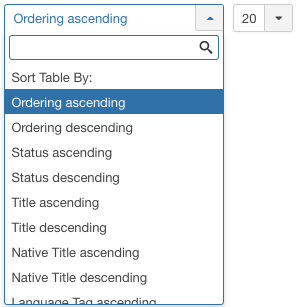 These column sorting input fields shows the current method of sorting applied to the table. Use the dropdown field choices and click the column heading name. Alternatively, click on the column heading to sort the list by that column's value.

This will also change the value in the drop field to correspond with the column header name. The list will then be sorted in order by that column and a sort icon (up or down arrow) will show next to the column name. Click a second time to reverse the sort, which will change the corresponding drop field.

The List Filters are a series of controls that let you limit what languages show in the screen. More than one filter may be entered. In this case, only languages that meet all of the filter conditions will show on the list.

Filter by Partial Title or ID

In the upper left is a search field and 2 buttons.

Above the column headings, there are 2 dropdown list boxes.

Lets you show only languages with the selected published status. 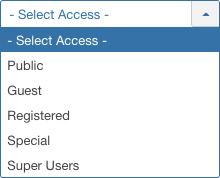 Page Controls. When the number of languages is more than one page, you will see a page control bar as shown below. The current page number being viewed is shaded.

At the top left you will see the toolbar.