This tutorial is for Joomla! CMS Version(s)

This is one of a series of API guides, which aim to help you understand how to use the Joomla APIs by detailed explanations and sample code that you can easily install and run.

This API guide explains in basic terms how to use the Joomla Cache API. The Cache API can be used as a simple dictionary or based on a Callback type of CacheController and File type of CacheStorage. Other types are mentioned, but not described in detail.

At the end of the guide, you can find the code for a simple Joomla module that you can use and adapt to experiment with the Cache APIs.

As a general rule, you should use cache on the Joomla site only, not on the administrator Backend, and the descriptions below relate to when you have the Global Configuration (System tab) parameter System Cache set to On – Conservative caching and the System – Page Cache plugin is disabled. 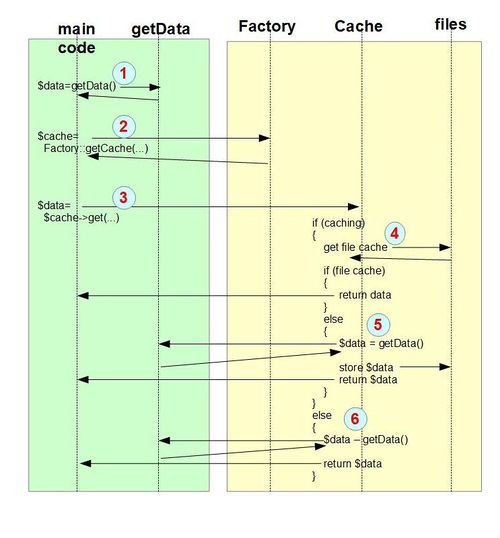 The diagram provides an overview of how Joomla cache works and the description below relates to the circled steps in the diagram. The code in green is your code: the code in yellow is Joomla code.

Let's imagine that in the main code of our extension we have to get some data and we separate out this code into a function getData(). Typically this function will involve a database query that may take a significant amount of time.

Step 1 relates to the case where we don't use cache – we simply call getData() and store the results returned.

Steps 2 to 5 relate to the case where we use cache.

Step 2: we call $cache = Factory::getCache() with the following parameters:

What is returned into $cache is a pointer to an instance of a CacheController subclass, based on what we pass as parameter 2. When we pass callback we get returned an instance of CallbackController.

Important If the data you're caching involves a database query whose results differ for different users take that into account when generating this cache id. Otherwise, users may see cached results that don't reflect what their privileges allow, causing possible confusion or security breaches.

If the query takes into account the Access field of a database record, then you can lump together the cache for users with the same Access rights by using:

Similarly, if you have a multilingual site then you want to separate the cache for different languages. However, Joomla does incorporate the current language tag (Factory::getLanguage()->getTag()) when it generates the cache file name, so you don't have to worry about this yourself.

Step 4 The Joomla code checks that caching is enabled and, if so, attempts to find the file that contains the cache. If it finds it, it reads the data from the file and returns the (deserialized) data to the calling function.

Step 5 Still within the case of caching is enabled, if the cached file can't be found, the Joomla code calls the callback function and captures the returned data. It then creates a cache file and stores the (serialized) data in it and returns the data to the calling function.

Step 6 If caching is not enabled, the code simply calls the callback function, captures the results and returns them to the calling function. It doesn't attempt to store the data in a cache file.

The Joomla cache classes are shown in the diagram. There are three fundamental classes (shown along the bottom):

Important If you look at the Joomla 3.x APIs for the classes that inherit from CacheController (e.g. https://api.joomla.org/cms-3/classes/Joomla.CMS.Cache.Controller.CallbackController.html) you will see that the methods get and store are marked as deprecated. However, this isn't actually the case. It is the get and store methods within the CacheController class that are deprecated, the intention being that they will be removed from the parent CacheController in Joomla v4 and these methods would be present only in the subclasses. However the PHP documenter sees the deprecated mark against the method in the parent class and automatically applies it (incorrectly) to the associated method in the subclass.

Also if you look at the PHP source code for the CallbackController class (currently in libraries/src/Cache/Controller/CallbackController.php), you will see that the signature of the get method in that class is different from that of the get method in the parent CacheController class, and again the PHP documenter outputs the method API incorrectly, based on the parent class rather than on the subclass.

These problems should disappear with the Joomla v4 APIs, when the get and store methods are removed from the parent CacheController class.

The use of File as the cache storage mechanism means that Joomla will write files in the folder defined by the Global Configuration parameter (System tab) Path to Cache Folder. If this is blank the default folder is used (as defined by JPATH_CACHE in includes/defines.php), which is /cache under the document root for Joomla 3.x and /administrator/cache under the document root for Joomla v4.

Assuming you are using Conservative Caching, each component, module or plugin has its own folder under the generic cache folder. (The folder name is based on the $group parameter that you pass to Factory::getCache()).

Within each folder are the cached files that you can edit and view the cached serialized data. The filename of each file is based (partly) on the $id parameter in your $cache->get() call described above.

Most of the methods have already been described, but here is a summary of the key methods that you may wish to call from your code.

To get a handle of the cache you should first call:

where you would replace com_example with the name of your component, module or plugin. This function returns to you the instance of the cache CallbackController class.

Once you have a handle on the cache CallbackController instance you can call something like:

Within the code for the get method Joomla does raise exceptions, but these relate to the case where you have tried to use a cache mechanism that is not supported. Even so, you may still wish to include your call to get within a try/catch block.

You can check if caching is enabled by calling

This will return true if either Conservative Caching or Progressive Caching is enabled.

You can store data into a cache file by calling

However, you will usually not need to call this function directly, because if you use the cache get method then this will store it for you automatically.

Below is the code for a simple Joomla module that you can install and run to demonstrate the use of the Joomla cache functionality. If you are unsure about development and installing a Joomla module, following the tutorial at Creating a simple module will help.

In a folder mod_demo_cache create these two files:

In your Joomla Administrator, go to Install Extensions and via the Upload Package File tab, select this zip file to install this sample cache module.

Make this module visible by editing it (click on it within the Modules page):

When you visit a site web page you should see the module in your selected position.

The anonymous function assigned to $myquery performs SQL COUNT operations on a set of tables, and then reorders the resulting $totals array in size order, outputting the most populous three tables.

If caching is enabled, the results of running $myquery are stored in a cache file, and if you repeatedly reload the web page you will see the time difference in running the full query versus obtaining the results from cache.

The module also displays the current time. If when you reload the page the current time doesn't change, it means that the whole module output is being cached, and not being run on page reload. This will happen if:

If Progressive Cache is on the output of all the modules are stored in cache (in the cache/com_modules directory), and upon page reload, the cache is used, rather than running the code of the individual modules.

If Page Cache is enabled, the whole web page is cached (in the cache/page directory).

It's instructive to experiment with the various cache settings, view the cache files in the file system and use the Administrator Clear Cache functionality to clear the cache for this specific module.

This Cache page describes the use of Joomla cache on a site.

The Joomla MVC Component Development tutorial has a page on Adding Cache into your component.

See also Using caching to speed up your code.