Crowdin is a cloud-based solution that streamlines localization (L10N) management for software projects.

The Joomla CMS official language packs and many other aspects of the project are managed using Crowdin to facilitate managing L10N activities.

What can be translated on Crowdin?[edit]

There's a variety of content that needs to be translated and localised for use with Joomla. Joomla's using Crowdin Enterprise for managing localisations across the project. A number of leading extension developers are also using Crowdin as their localisation tool, and you can see those extensions also listed under Joomla's Crowdin project page as related projects.

A variety of 3rd party extension developers have also chosen Crowdin as their L10N solution. These are displayed on Joomla's Crowdin, but are managed by the individual developers.

To start using Crowdin, create an account at https://joomla.crowdin.com. If you're already using GitHub to contribute to the project, you can use your GitHub login (along with a few other OAuth options) to sign up to Crowdin.

Once you've created your account, visit the Crowdin Project for Joomla to contribute to Joomla 4 core translations, other translations for Joomla websites, Joomla marketing projects and other Joomla extensions.

Joomla 3 translations are also managed on Crowdin, but are outside Joomla's Crowdin Enterprise structure. The setup works the same in regards to contributing translations, however the proofreading and language pack process is different to the steps described for Joomla 4 in the next section.

Once logged into joomla.crowdin.com you'll see the project dashboard, showing all of the projects that are available to translate. Click on a project to then see what the status of each localisation is for that project. 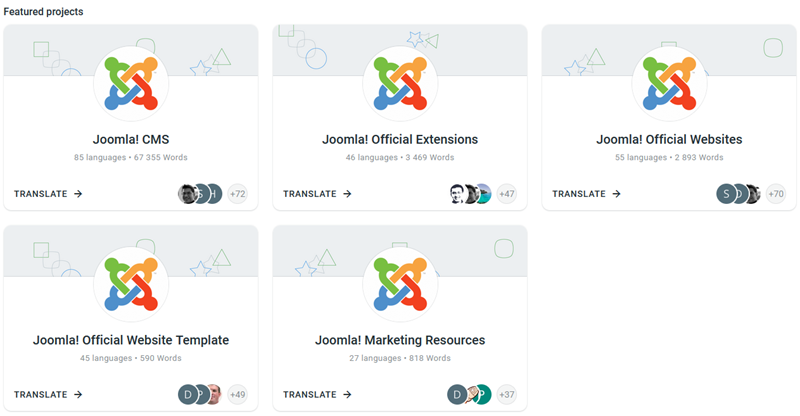 When you go into a project, you'll see all of the available languages ready for translation. To start translating, hover on the language and then click on the "Translate" button that appears. 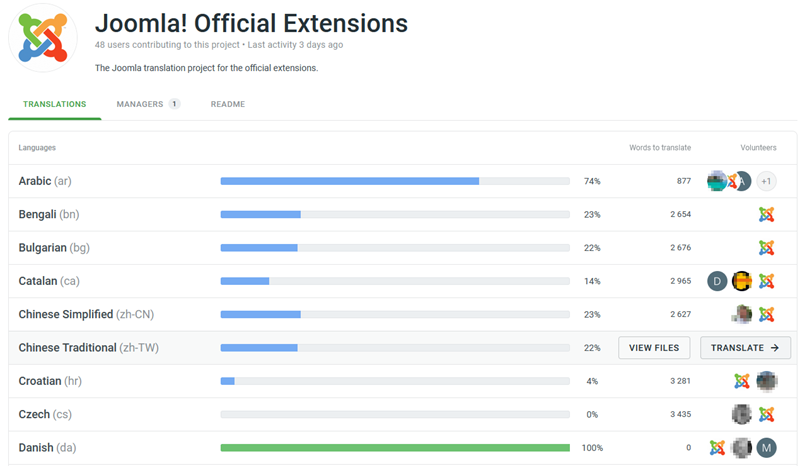 When you click translate, you'll be taken to the Crowdsourcing language page.

Once you've finished translating all the available strings (or as many as you have time for in the session) you can exit the editor and return to the project by going to the menu at the top right of the screen and select "Quit Editor".

When you've begun providing crowdsourcing translations in each of Joomla's featured projects, you'll be notified when new strings are available to translate that have been added to the various projects.

Before translations appear in Joomla as part of an updated language pack, they need to be approved by that language's proofreader(s). The role of a proofreader is to:

To become a proofreader, join the Joomla Translation Program Team. For more information on the processes proofreaders need to complete with making language packs, please see Crowdin for Proofreaders.

The also has a range of documentation articles that translators can contribute to.